In this guide I will show you how I built a 7-inch long range quadcopter with the ability to fly for 33 minutes. This build turned out to be super fun and absolute nuts!

The quad have long very long flight time, looks really good, the motors sounds so damn clean and it was just really fun to build!

You can find the parts I used for this build in the table below.

These links are affiliate links. That means I get a small cut from any purchase you make after you have clicked the link. This won’t cost you anything extra.

A few months ago I smashed my 7 inch long range quad into one of Norway highest waterfalls. The water shorted something on the quad as I could see the voltage dropping rapidly.

.
I few seconds later the quad lost all power and smashed into the mountain wall a 1000 meters above me. It was impossible to walk up there to start looking for it. Too wet, too step and too dangerous. Well, f*ck….

Before I start this build guide I will talk a little about the parts I’ve chosen for this build and why I have chosen those instead of the parts I used in the old 7 inch build.

Frame
The old frame I crashed was an Ichabod LR from Shendrones. It is a great frame and I also have this frame in a 5 inch build.

However. I didn’t like how the back end of the frame was very wide and flat. Not really much space to install all the hardware you need in a long range quad. I also felt like that the flat profile of the frame made unnecessary drag when flying fast in windy conditions.

So. For this build I chose the iFlight Titan DC7 frame instead. It’s basically a frame made for 5 inch quads but with longer arms so you can fit bigger props.

I have a friend who have this frame so I knew what I was buying. It has a lot of room for all the hardware and wiring. You can easily mount batteries both on top and bottom of the frame.

It’s a very popular frame so finding 3d parts online to print is very easy. That’s a huge plus in my book. Very convenient to just print a GoPro mount that fits with the screw holes on the frame perfectly.

This is a quality frame and you will notice that straight away when you get the frame.

DJI FPV System
Nothing have changed here since the old frame.

After trying DJI’s new digital system a while back ago I realized quickly that this digital system is on another level compared to even the best analog FPV systems out there.

What about range?
Unlocking 700mw on your DJI Air Unit and installing a VAS Cyclops directional antenna on your DJI FPV goggles and you have 5km++ range. That should be enough for most people.

Flight Controller and ESC
On the old frame I had the Kakute Holybro F7 + Tekko ESC combo.

The reason for this is that this FC have a dedicated wire and port for the DJI Air Unit. No soldering or BEC needed. With the old FC I had to solder it to the FC and I also needed a BEC (voltage regulator) as the FC didn’t have a port with the right voltage for the DJI Air Unit. Just more parts and more things that can go wrong.

Motors
I have no comment on the motors yet as I haven’t tried them. They look amazing tho.

Crossfire Diversity Nano
I’ve never had a failsafe while using crossfire. It just works. It’s a slightly more expensive setup than Frsky but the ease of mind it creates while flying long range is priceless.

Above is a diagram of the wiring. I didn’t include the wiring from the ESC to the motors or the main wire that goes from the FC to the 4-1 ESC. See the manual for that. It’s really simple.

Also. This FC has its own port for the DJI Air Unit. All you need to do is to plug in the pre-made wire.

It doesn’t matter how you connect the motors to the ESC. I like to make it clean so I always connect the wires so all of them go straight with no overlapping.

Doing it this way will make all the motors spin the same direction. No worries. We will fix this in software.

Motordirection can not be adjusted in Betaflight. For this you need a software called BLHeliSuit32. It’s free and you can download it here.

When you have unzipped the folder and opened the program. Connect your FC to your computer with an USB cable.

Click the “connect” button down in the middle in BLHeliSuit32. Connect a battery to the quadcopter. Then click “read setup”. BLHeliSuit32 should now be able to read all your ESC’s.

Now we need to reverse the motor number 1 and 4. To do this uncheck all ESC’s down in the middle except number 1.

Then you find motordirection in the settings, turn it one step to the right. It should now say “Reversed”. Click “write setup”.

Uncheck ESC 1 and check ESC 4. Do the same process.

To figure out which firmware is correct for your flight controller:

See here how you can fix a “broken”/bricked flight controller.

After you have found the correct firmware in CLI you need to go to the update firmware section of Betaflight. Push the button in the top-right corner next to connect.

Find your target firmware in the drop-down menu, then select what firmware version you want. I usually take the latest stable version.

Push “Load Firmware [Online]” down in the right corner of Betaflight. Once your firmware is loaded you can push “Flash Firmware”.

This method does not work for the FC I bought for this build. For some reason, installing the latest correct firmware with the method above produce several errors. Some of the ports disappears and the gyro will not work.

After some research online I found that you have to use another firmware.

You need to be looking for ” EXF722DUAL” in the dropdown menu in Betaflight. Choose version 4.1.1 (Legacy).

Okay. Now that we have updated to the latest version we can start doing all the necessary settings in Betaflight.

In the wiring section we wired:

DJI is wired in a dedicated port but if you look in the FC manual you will see that it connects to TX2 and RX2.

The reason we need to connect the DJI Air Unit to the FC is so we can get OSD information in the goggles. You can also manipulate your PIDS with in the DJI Goggles. We will set this up later.

Next up is the configuration tab. In this tab we need to a whole lot of settings.

The reason you want the motors to spin in reverse is so you won’t get dirt in the camera when you crash.

If you have the same motors as I do the correct number of motor poles are 14. If you have different motors than in this build you need to count the magnets on the inside of your motor. Most motors have 14 magnets.

Other Features
Turn these ON:

Let everything stay as it is on this tab. We will tune the quadcopter after the first test-flight.

Modes is where you set up all your switches. I have it set up like this:

This setup is mostly done in your radio. You need to go to your INPUTS and MIXES in your radio and set up what channel should be connected with what switch)

In this tab you are free to do whatever you’d like. I will add a screenshot to my settings tho.

This build is a long range quad. For me it’s important to have return to home arrow, battery voltage, mah used and signal strength.

I also have a script running in my radio that warns me if the RSSI signal strength goes under a certain value.

Time for the first test-flight. The drone flew pretty damn good with stock PIDS. No strange behavior. I noticed some turbulence when I flew over a roof where I know there was some wind. This is the quad reaction too slow to the turbulence. I will try to tune this out later.

Here is the DVR record of the first ever flight with this drone:

This is the most crazy part of this build. With the li-ion batteries that I built for this drone, I got 33 minutes of flight time!

That was not a flight where I just hovered the quad in front of me. I flew around like I would fly a normal quad that I’m cruising in the mountains!

I would probably get a few minutes less on an actually mountain flight as I have to gain a lot of altitude.

Nevertheless, 33 minutes of flight time is very impressive and can’t wait to get to the mountains to take this beauty on a looong ride.

For now, I think the quadcopter flies very good as it is. I will get a feeling for the quad and fly it for some weeks before I start to experiment with the PIDS.

I will slowly push the limits of this quad. Milestones will be documented below.
.

First flight in the mountain

23rd of September I had my first proper flight in the mountain with this quad. I used both 4000 mah li-ion batteries on the quad and I had a GoPro at the front. Fully loaded!

I flew 2km out. At that distance I started to get very bad video signal. I used the stock antennas for the goggles for this flight. I expect much better range with my VAS cyclops antenna. I will use that for the next flight in the mountain.

Unfortunately my GoPro camera went out of battery at 15 minutes. Who would have thought there would come a day there the quad outruns the cameras battery? 😀

Video of first flight in the mountain:

Second flight in the mountain

Switched out the stock antennas on the goggles with a directional antenna. The name of this antenna is VAS Cyclops.

This improved the range somewhat, but nothing drastic. Next attempt will be to change how the antennas are positioned on the quad. Right now I have them straight out on the sides as I forgot to order the extensions I need from the Air Unit to the antenna mounts on the back of the quad.

The signal got very weak at times and the bitrate was down at 10mb/s. Bitrates down at 10mb/s is risky as the video feed can suddenly cut at that point.

I have ordered the extensions and extra long antennas so they get out of the way of the batteries and frame.

Video of second flight in the mountain:

More pictures will come as soon as I get the chance to take some nice photos of the quad outside. Right now I just want to get this guide out there as so many people ask me on Instagram what kind of drone this is.

If you have any questions, or you want me to add some more information to this article, feel free to write to me in the comment section below.

How much does it coast to huile one prototype ?
Would you Say your Gand made version is better than a commercial Maverick ?

A total beginner guide for FPV drones - Everything FPV

How to make money with FPV drones

How to get butter-smooth cinematic footage with a FPV drone 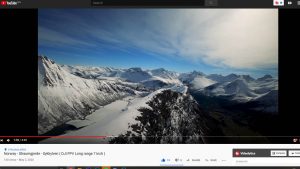